KIU will be the first in space!

Kazan Innovative University had a great honor to host a meeting with 2 Russian astronauts – Anton Shkaplerov and Alexey Ovchinin. After returning from International Space Station, they met with KIU students and told them about their adventure. 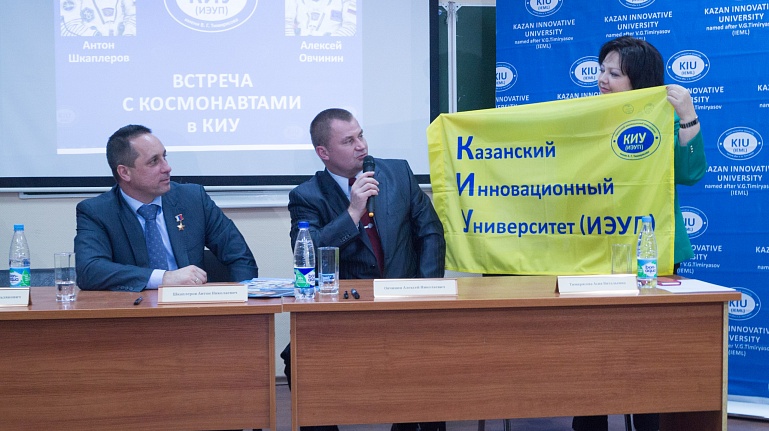 There is a reason for KIU to become a host of such a historical event. While being in space, Mr. Shkaplerov and Mr. Ovchinin recorded a video message to KIU students. Moreover, they took KIU flag to ISS, so we can say that a part of our university has traveled to space! Now the flag printed with special cosmic stamps is kept in University’s Museum.

No wonder that the guests were greeted with terrific applause. KIU rector Asiya Timiryasova emphasized in her welcoming speech that the astronauts are not just brave modern heroes but also an example of motivation and self-control: they had been waiting for the flight for more than 10 years and overcame numerous obstacles. This proves that there are no formidable barriers for a truly goal-oriented person.

Here’s an interview kindly given by the astronauts.

- How did you decide to become an astronaut?

Anton Shkaplerov: Alexey and I have a similar love story with sky and space which dates back in our childhood. 1970s were a golden age of the Soviet cosmonautics. Yuri Gagarin, the first man in space, and the next space discoverers were our compatriots, and we have a lot to be proud of. Not only is Russia the biggest country – believe me, it is really big when you look at it from space – but also it is the greatest one. We became the first in many stages of development of manned space activities, and nowadays we keep the lead in space.

Talking about space flight, we should say that it was our childhood dream. We are both military pilots and have been waiting for this opportunity for more than 40 years. For this flight we had been preparing for almost 10 years, but I would like to say that I was ready to prepare for all my life so that to see our planet from ISS window. You know, you can take thousands pictures of the Earth but there is no such camera that can depict all this beauty you see with your own eyes from the orbit of the Earth. This very moment when you look at our blue planet worth dedicating it all your life.

- Before getting to the orbit the astronauts undergo a number of trainings and tests. Which were the hardest?

Alexey Ovchinin: In fact, preparations take a lot of time. Firstly, a man becomes a candidate for astronaut and for 2-2,5 years prepares for the next stage during which, for example, our group passed 178 theoretical exams. Then we were put into isolation chamber where you can’t see or hear anything. There we had to spend 5 days solving tests, and for the last 3 days we were even not allowed to sleep. It requires a lot of power, because if someone falls asleep he will be excluded from the astronauts’ team. Not all candidates can do this.

Anton Shkaplerov: For me the hardest task was parachute jump. As I said, Alexey and I are both military pilots, and we are obliged to jump with parachute regularly even after becoming members of astronauts’ team. This is a unique practice that is used only in our country. Yet, as a pilot I couldn’t understand why we should jump from a properly functioning plane! But anyway we had to jump, so by now I have done more than 500 jumps.

- How does food in space differ from traditional, and did your gastronomical predilections change there?

Anton Shkaplerov: To be honest, our food is very tasty! Before flight we try all positions of Russian menu and in NASA of American one. I should say that I didn’t like American space food at all, except desserts – they are very nice. At the same time, American astronauts like some dishes from our menu because they are really good. Every Friday we make a collective dinner in Russian or American segment of ISS where we bring our canned food which Americans like a lot, and they treat us with desserts and ice-cream. And the best thing is when a cargo spacecraft delivers spices, fresh fruits and vegetables. At those moments we are thrilled to bits!

- How often do you contact your family while being on the orbit?

Alexey Ovchinin: Now there is no problem with that. We have a modern IP-phone and we can always call to our family and talk to them. On weekends we make video conversations via a special app like Skype which can be installed on a phone or a tablet. Before our families used to go to the special centers to contact us but now they have an opportunity to talk to us right from home. I like to show my daughter some zero-gravity-related tricks. She is over the moon when I do this!

- Have you ever seen any evidence of extra-terrestrial civilizations?

Anton Shkaplerov: No, we haven’t. Although Alexey and I believe that we are not the alone in the Universe. Taking into account its vast size, we think that there is a similar habitable planet.

- What if something goes wrong and you land in another country?

Alexey Ovchinin: Believe me, nothing bad will happen. We are ready for any spontaneous situation and know how to survive in any climate zone. Besides, we have special navigators, satellite phones, food for 3 days, and in the area of our estimated landing special rescue groups are waiting for us. So nothing threatens our life.

- What do you miss the most in space?

Anton Shkaplerov: Most of all I miss my family and friends. I wish I could land on the Earth one or two times a month and meet my family.

Alexey Ovchinin: I’d say, if an astronaut could return to the Earth at least once a month, I would work in space all my life! To be honest, what I really miss the most is meeting my family. Sometimes I even see in dreams how I land on the Earth for a weekend and everyone is surprised to see me.

- Do you feel like you belong to our University?

Anton Shkaplerov: Every astronaut can take along to the orbit only 1 kilo of his own goods. Something that is most valuable and precious. Alexey took the flag of your university. I think it’s very telling. Besides, the Republic of Tatarstan is going hand in hand with space. For instance, your compatriot, native of Bugulma Sergey Ryzhikov is on the orbit now. He is the first astronaut from Tatarstan. Moreover, Dilyara Shaykharatova, student of your university, may become the first woman from Tatarstan in space. Right now she is preparing to become an astronaut. Undoubtedly, this requires incredible stamina and commitment. If a representative of Kazan Innovative University will succeed, this will be a great honor.

- Do you have any superstitious beliefs or traditions?

Anton Shkaplerov: We are ordinary people who have common beliefs – we don’t like a devil's dozen, black cats…

Anton Shkaplerov: See, there are many exceptions. Jokes aside, there is one custom. Before starting the flight, we watch an old soviet movie “White Sun of the Desert”. For our colleagues from other countries there are English, Italian and Japanese subtitles. A couple of times we didn’t keep up this tradition and the blastoff was delayed due to a technical malfunction. Besides, before every flight we plant trees on a special alley where the oldest tree was planted by Yuri Gagarin himself!

- Thank you for your interview! 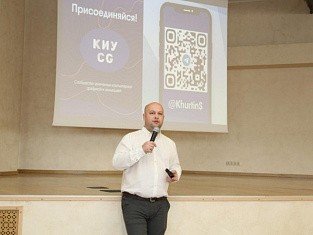