KIU first vice-rector Igor Bikeev noticed that more than 1300 people took part in “Kazan scientific readings” this year. They do not only represent Russian regions but also different countries: Belarus, Uzbekistan, Brazil and others. He also told about origins of this event. The readings arose from a project of Student scientific society of our university. The society organizes this event to the present time. The project won support of KIU founder and first rector Vitaly Timiryasov. In his student days he was deeply involved in research activities. Nowadays the conference deservedly bears his name.
KIU rector Asiya Timiryasova welcomed the participants and told about importance of the conference not for scientific society of KIU but also for the university as a whole:
Since the establishment of our university Mr, Timiryasov paid a lot of attention to the development of youth science. He believed that there was only 3 components of a truly successful university: good education, fundamental research and well-run pedagogical work.
Apart from university authorities, many famous Russian researchers took part in a general session. Famous Russian anti-corruption scholar Sodnom Budatarov told everyone about his scientific activities and prospects of working in this field that modern students have nowadays.
In the second part of the general session KIU most successful students presented their reports. After that students took part in workshops. 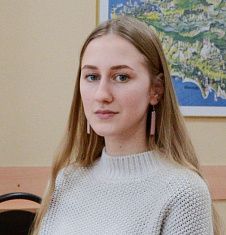